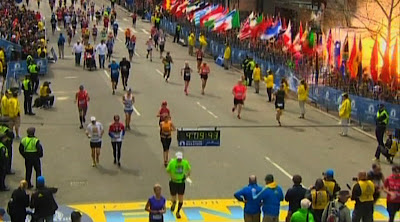 Currently, I've only written these four articles on the Boston event:

In spite of the FBI claiming that Tamerlan Tsarnaev had never been considered a national security threat and that they never tried to turn him into an informant, when Tsarnaev attempted to emigrate into the USA, he had been flagged by the FBI as a 'Known or Suspected Terrorist' and his application for citizenship was indefinitely delayed, apparently as leverage to convince him to become an informant.

After the initial investigation, but while he was still on a watch list, Tamerlan was able to travel to Russia and try to hook up with militant groups without being stopped. It's very possible that by this time he had already been coerced by the FBI into working for them.

The FBI had been in contact with the Tsarnaev brothers for several years prior to the bombing event. They had been hounding the brothers to become informants, and whether the brothers refused them or went along with it, they were going to get set up anyway, unless they produced a better target for the FBI to go after. That's just how government agents do things. If they invest time and money into turning someone, they want something for it. They don't like wasting their efforts, and they don't care about what might happen to their informants/patsies. As long as the FBI continues to look good in the end, it's fair game to them. Lies, blackmail, entrapment, murder.... they will do whatever it takes to get what they want.


“At the start at the event, at the Athlete’s Village, there were people on the roof looking down onto the Village at the start. There were dogs with their handlers going around sniffing for explosives, and we were told on a loud announcement that we shouldn’t be concerned and that it was just a drill. And maybe it was just a drill, but I’ve never seen anything like that — not at any marathon that I’ve ever been to. You know, that just concerned me that that’s the only race that I’ve seen in my life where they had dogs sniffing for explosions, and that’s the only place where there had been explosions.”

Here's a close-up photo compilation someone put together, showing Jeff Bauman (grey and white tee shirt) with two agents covering him while he gets his prosthetic in place immediately after the 'bomb' goes off. Note that there is no blood or tissue anywhere, except under the hand of the agent in the hoody. He's holding a blood bag, and will spread it around to make the scene look more
realistic. (click on the image if it isn't animated)

Here are two close-up videos of the first bomb blast.

This first one shows how the force of the blast was directed into the fencing, which acted to stop it from reaching the street. Note the two pink markers just beneath the flags that mark where the force of the blast is directed. These would have been necessary to make sure that no one would be hurt in this controlled explosion. You can make out a man in the blue jacket holding the pink marker on the left This same man is seen in many other photos of the blast scene, carrying what looks like a rolled up sheet of pink cardboard.

This next image shows the man with the pink cardboard standing at the same location just after the blast. He appears to be one of the crisis managers on the scene, coordinating the actors. He has a definite 'government agent' look about him, and he doesn't seem at all surprised by the explosion. 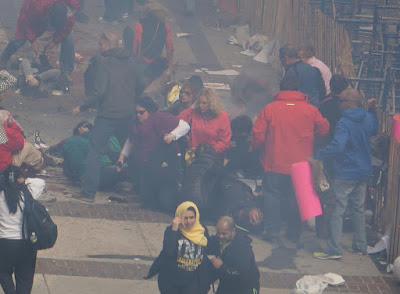 Here's a second close-up of the same explosion, but a little to the right of the first video close-up. There's a lot to be discerned from this short clip. Note that the main force of the explosion here is lateral, rather than horizontal. Also note that a wall of flames rises behind the line of flags and fencing (see image below for a slightly better view of this). This is not easily explainable unless the flames were caused by something other than the bomb.

The alleged victims recovered from their wounds in record time.

Jeff Bauman, the star victim/witness who identified the Tsarnaev brothers as the perpetrators, allegedly lost both legs when the first bomb went off, then suffered a full 11 minutes of bleeding out before he was thrown into a wheelchair with his open wounds under him and carted off while still fully conscious, in spite of having no blood left in him to even drip on the ground. He made a miraculous recovery and was out of the hospital and smiling at the cameras only a week later.

Kristle Campbell was apparently using a cover identity and is still alive. Her real name appears to be Alicia Campbell. See: http://www.liveleak.com/view?i=c02_1397608487

Jeff Bauman allegedly provided a description of the bombers to the FBI, which led to a search through photos and videos taken at the scene. They quickly found a number of them that showed the Tsarnaev brothers among the crowd.

In spite of the FBI already knowing who the Tsarnaev brothers were, they feigned ignorance and asked for the public's help in identifying them, and plastered their pictures all over the media.

But the FBI were monitoring every move that the brothers made while they roamed through the crowds at the Boston marathon, as this video reveals:


After the bombings, the Tsarnaev brothers continued on with their lives as normal and showed no signs that they had anything to do with the bombing. It was only when they saw that their pictures were in the news and the FBI was asking the public for help in identifying them that they went on the run.

The Tsarnaev brothers allegedly killed MIT police officer Sean Collier in an ambush, then car-jacked a foreign national student named Dun 'Danny' Meng, who eventually escaped. The manhunt closed in on the brothers in Watertown. A shoot-out took place and the older brother was killed while the younger one was able to get away and hide in a covered boat in the backyard of a home. The police soon tracked him down and made an arrest.

During the investigation of the bombing, a friend of the Tsarnaev brothers named Ibragim Todashev ended up getting shot dead during an FBI interrogation. No clear explanation has ever been given for this incident. Todashev's friends and family were later harassed, some of them were also threatened with deportation if they didn't become informants.

The FBI set up one of the Tsarnaev brother's friends in order to use him as a witness against them. Stephen Silva was pressured y the FBI into acquiring some heroin for an informant on several occasions, for which he was arrested for trafficking. He faced up to 40 years in prison if he didn't testify against his friends. The heavy charges gave Silva the incentive to say whatever he was told to say in order to save himself, which is all the FBI really cared about. The informant received over $66,000 for helping to set Silva up.

The following people resigned not long after the marathon: