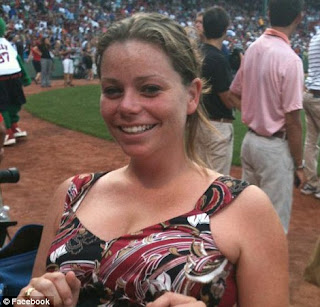 The following research was inspired by the earlier research done in this LiveLeaks video, which attempts to show that Krystle Campbell, who was allegedly killed in the Boston marathon bombing, is still alive. This earlier research was done soon after the event, and much of the evidence that's shown there has since been scrubbed from the internet, so I decided to see what I might be able to dig up on her today, over 3 years later, to see if there are still signs that she's alive.

The LiveLeaks video shows that Krystle Campbelll had worked for AEW Capital Management, LP, as well as at Deloitte, LLP, and that she had gone to Northeastern University. Here's a screenshot of the video showing a public records search listing for Krystle Campbell that lists her working there: 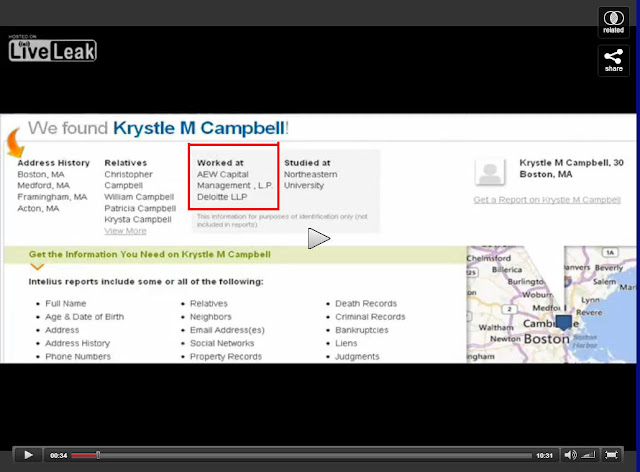 We know that this is the right person because it also lists her parents, Patricia and William Campbell. We also know that her middle name is Marie.

Note: AEW Capital Management is an international real estate investment company, which means that it manages properties for absent landlords, among other things. Krystle Campbell was allegedly the manager of a restaurant called Jasper White's Summer Shack in Boston, which could have been one of their assets. She had allegedly left there to work at another restaurant called Jimmy's Steer House in Arlington, which might be one of their assets as well. At this point, I can find no public records for these two businesses.

I decided to begin my research by looking for other LinkedIn accounts that might be associated with Krystle Campbell, and soon came across a listing for someone named Krystle Muise, who also lives in Boston and also works at AEW Capital Management, LP: 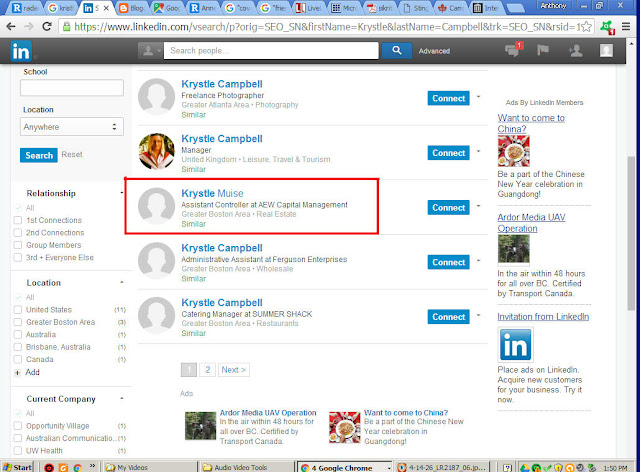 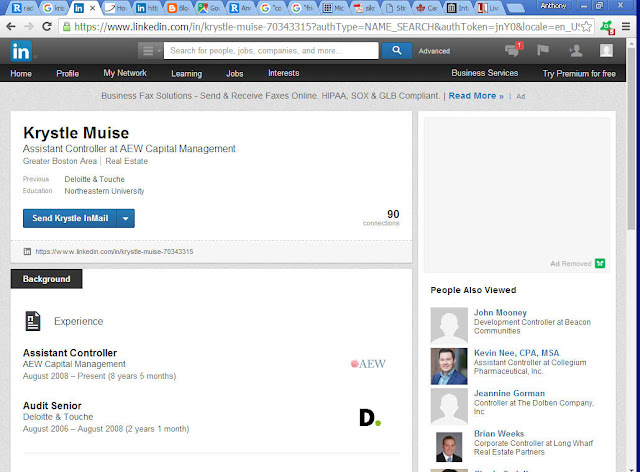 It looks like the same person with all the same criteria, but with a different last name. I still wasn't satisfied, so I ran the name through Google and found a facebook account for a Krystle Muise who also uses the name Krystle Campbell: 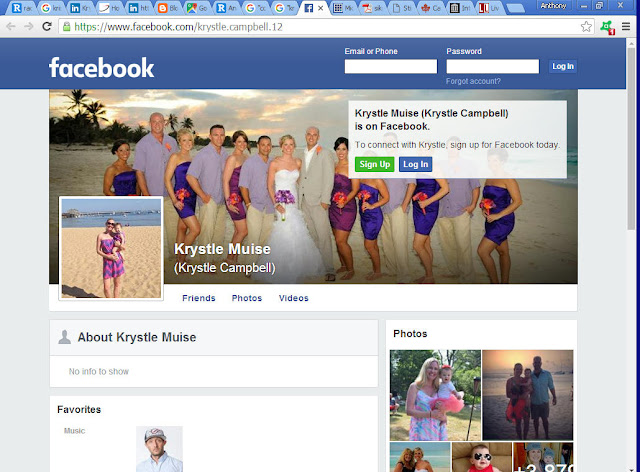 I also found one Whitepage listing for a Krystle Muise in the Boston/Gloucester area who also goes by the name Krystle Jean Campbell. 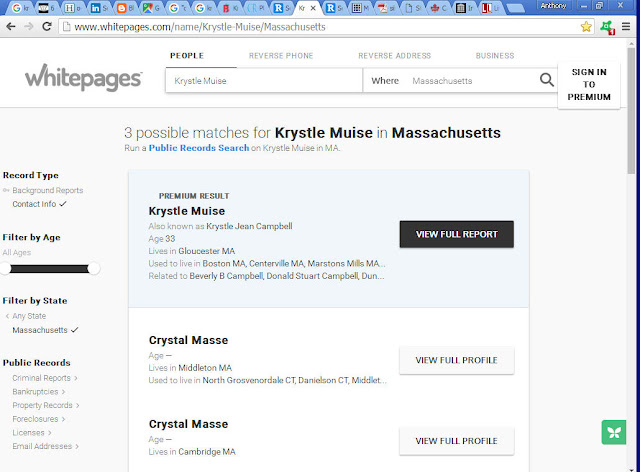 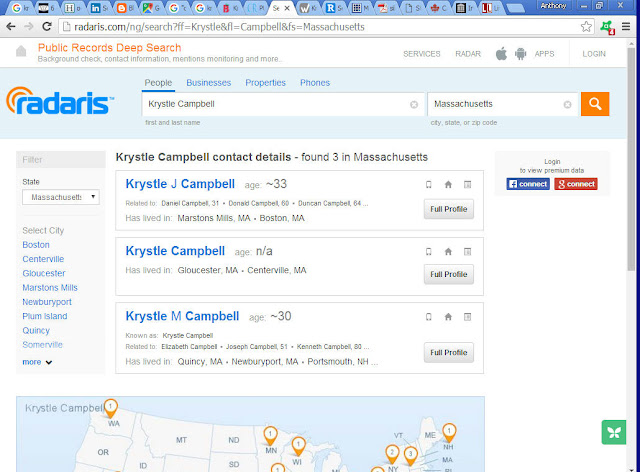 The Google search for Krystle Muise also came up with a link to this wedding announcement: 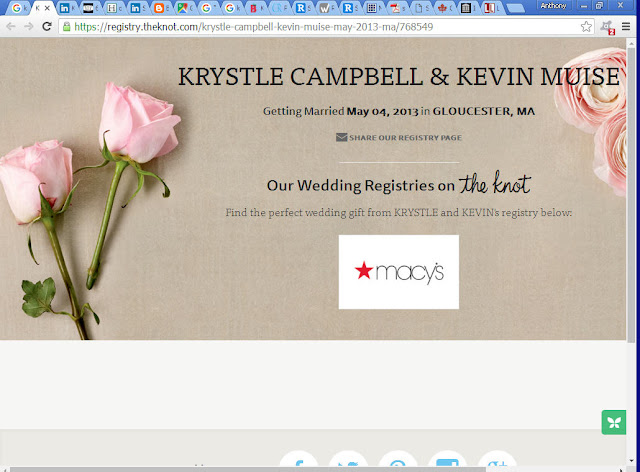 Here we have a direct link between Krystle Campbell and someone named Kevin Muise, which would explain the change of name to Krystle Muise. Gloucester is just north of Boston and comes up in many of the public records listings for Krystle Campbell. Note that the date of the wedding is just a few weeks after Krystle's alleged death... Perfect timing for faking her death and changing her name. There are no other online postings announcing this wedding.

Here's an obituary I came across for Kevin's father, who died on July 15, 2013. Note that it doesn't mention that Kevin and Krystle have a daughter, but it does tell us that Kevin has a sister named Lauren. 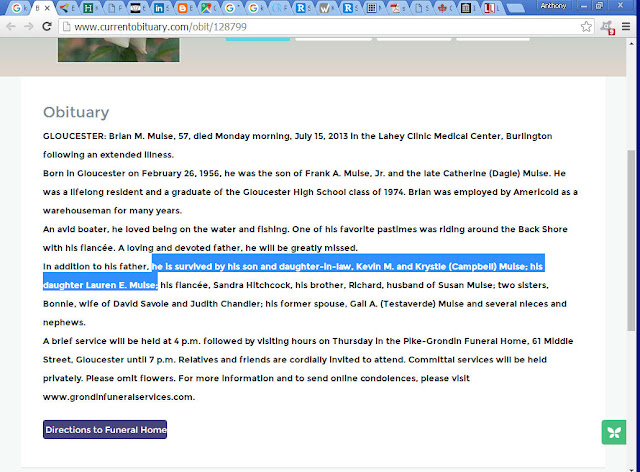 This later obituary from January 2015 tells us that Kevin and Krystle now have (or are expecting) a daughter named Lauren: 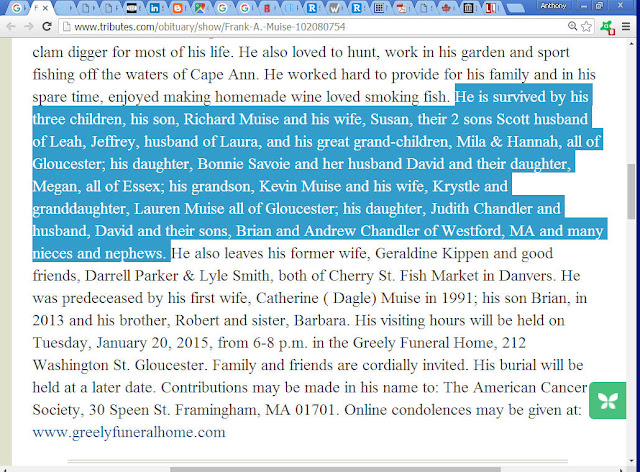 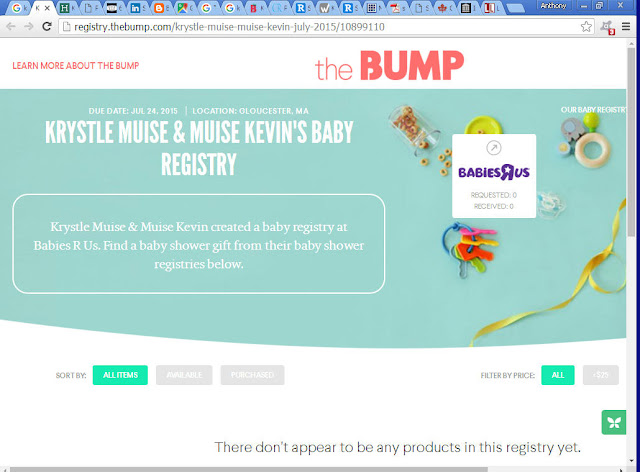 If Krystle already knew she was pregnant with a baby girl in January of 2015 when Kevin's father died, then this all makes sense. The child would be a year and a half old by now, which is about the age of the child in the photos on Krystle Muise's facebook page.

I also checked if there was a Krystle Muise who had graduated from Northeastern University, and found this confirmation: 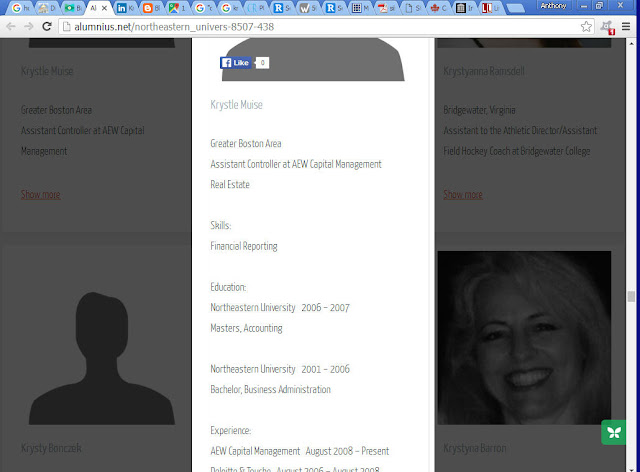 On the other hand, Krystle Campbell's background information offers no leads that can be checked.

While I was searching, I also spotted this:

Apparently, Kevin Muise is a Gloucester police officer. The link doesn't show the text we see in the listing header, but another search came up with a number of news articles about an incident in Gloucester where a police officer named Kevin Muise was the alleged victim of a head-on collision with a drunk driver, causing Muise serious injuries. I'll bet it did. He's somewhere in the photo on this next page, which was taken back in September, 2011. This is probably when he first entered the police force: 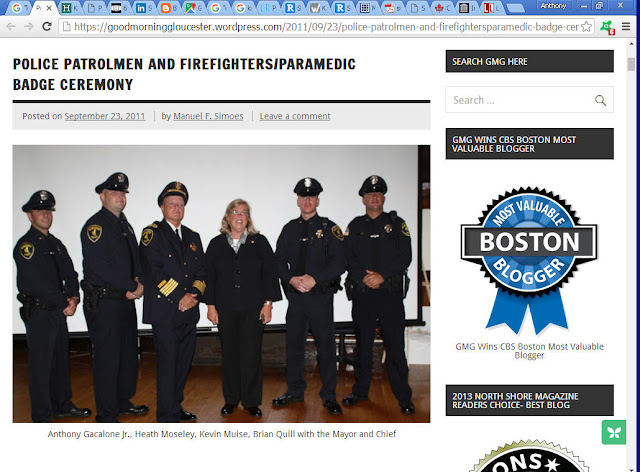 I also came across a few fundraising websites linked to Krystle Muise. Fundraising appears to be one of the defining activities of many of these crisis actor/victims. Here's Krystle listed on a results chart for a fundraising run that she took part in on May 17, 2015: 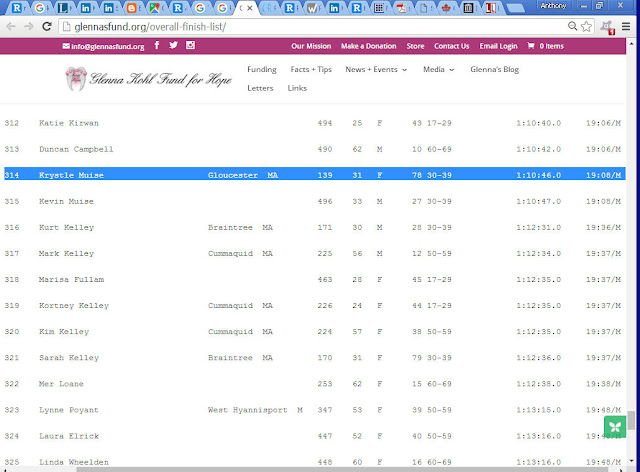 From all of this research, we can be pretty certain that all of the following names are tied to the same person, and are being used to bury her real identity from anyone who might go looking for her: