Anthony Forwood or whoever you are, thank you for this post of yours, though I'd wish you never did this. It will only served to discredit you. I have NEVER been associated with OSI in any way, nor do I associate with their members. And, FFCHS does NOT have a racket of targeted individuals bantering around to cause intentional problems. I banned you years ago from a TI online social media support group due to your disinformation about active denial technology and methods that is used to harass and harm innocent citizens. It is my guess you are a government paid infiltrator/agent. The lies you have posted here are ridiculous and trustworthy for an example of what a true perpetrator is. I hope someone sues your eyeballs out. - Ken Wilbourne


Ken, you claim that I’m a government-paid infiltrator/agent… based on what evidence exactly? Because I point out damaging things about you and your cohorts and what you’re all doing to harass and discredit real TIs? I’ve tried to discuss these issues with you, Derrick Robinson, Robert Duncan, and others, with the same avoidance tactics used against me each time. As it is, this sort of accusation you make here is a typical perp tactic when it comes with absolutely nothing to back it up. They’re empty words, Ken... nothing more. Why don’t you be kind enough to point out exactly what grounds you base this accusation on? Otherwise, I really have no need to defend myself, and your post only serves to show others how you and your ‘ex’-government associates at FFCHS operate. However, if you can point out something SPECIFIC that I’ve posted on my blog or elsewhere that’s at fault, I’d be willing to change it to better reflect the truth. I tried to discuss some issues with you once before, but you chose instead to immediately kick me out of your facebook group, as you’ve admitted here. You avoided answering for yourself and for FFCHS about the things you continue to promote as true without ever providing any evidence beyond your say-so, and you decided instead to close out the person who questioned it and sought that evidence. That says a lot about you…


As it is, Ken, YOU specifically are involved in organized targeting against selected TIs on facebook, including Dee Dorsty, which I have evidence of posted below. Seeing that this targeting also involves Dee Hardin, another long-time FFCHS member, and Will Litigate (aka OSI Informers, aka Greg Gamache), who you claim to not be associated with, it just further proves that FFCHS and the OSI gang are working together, and that you’re a liar. Apparently, this is the usual MO for all of you, to gang up on someone and smear them… but never with any evidence of any wrongdoing on the part of the person you attack. Compare that to what I provide on my blog regarding the questionable activities of FFCHS. My evidence comes from your organization’s own publications, from the quoted statements in the media of its board members, and from many first-hand experiences with you and your associates. Why don’t you answer to that? Calling me an infiltrator/agent without any evidence whatsoever is merely a weak tactical response to the strong evidence I’ve been compiling that only fools would ever fall for. As it appears more and more, you’re mixed up with the real infiltrator/agents, particularly Derrick Robinson, who’s even admitted to being in the NSA, which no one really ever gets out of once they sign up.


So Ken, instead of just generalizing with your accusations, tell me what you specifically find fault with and why and I’ll address it, and we can go from there. Don’t just try to label me without backing yourself up with something. That’s an extremely transparent perp tactic that anyone with ANY intelligence can see through. And don’t premeditate what you think my response will be in order to excuse yourself from doing so, either. That’s a cop out that your good friend the ‘Harvard grad’ Robert Duncan chose to take, which only resulted in drawing my attention to all of you at FFCHS once again and digging up more dirt.

If you feel that there’s a lawsuit here, please feel free to send me a subpoena. I would love to get you people into a court of law where you’ll be made to explain yourselves: 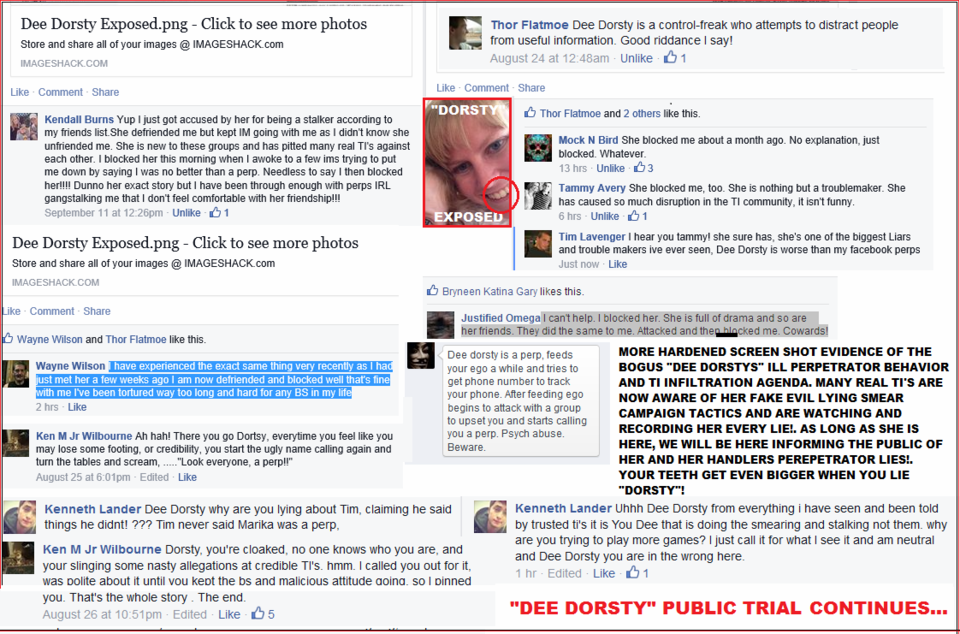 Posted by Anthony Forwood at 3:53 PM