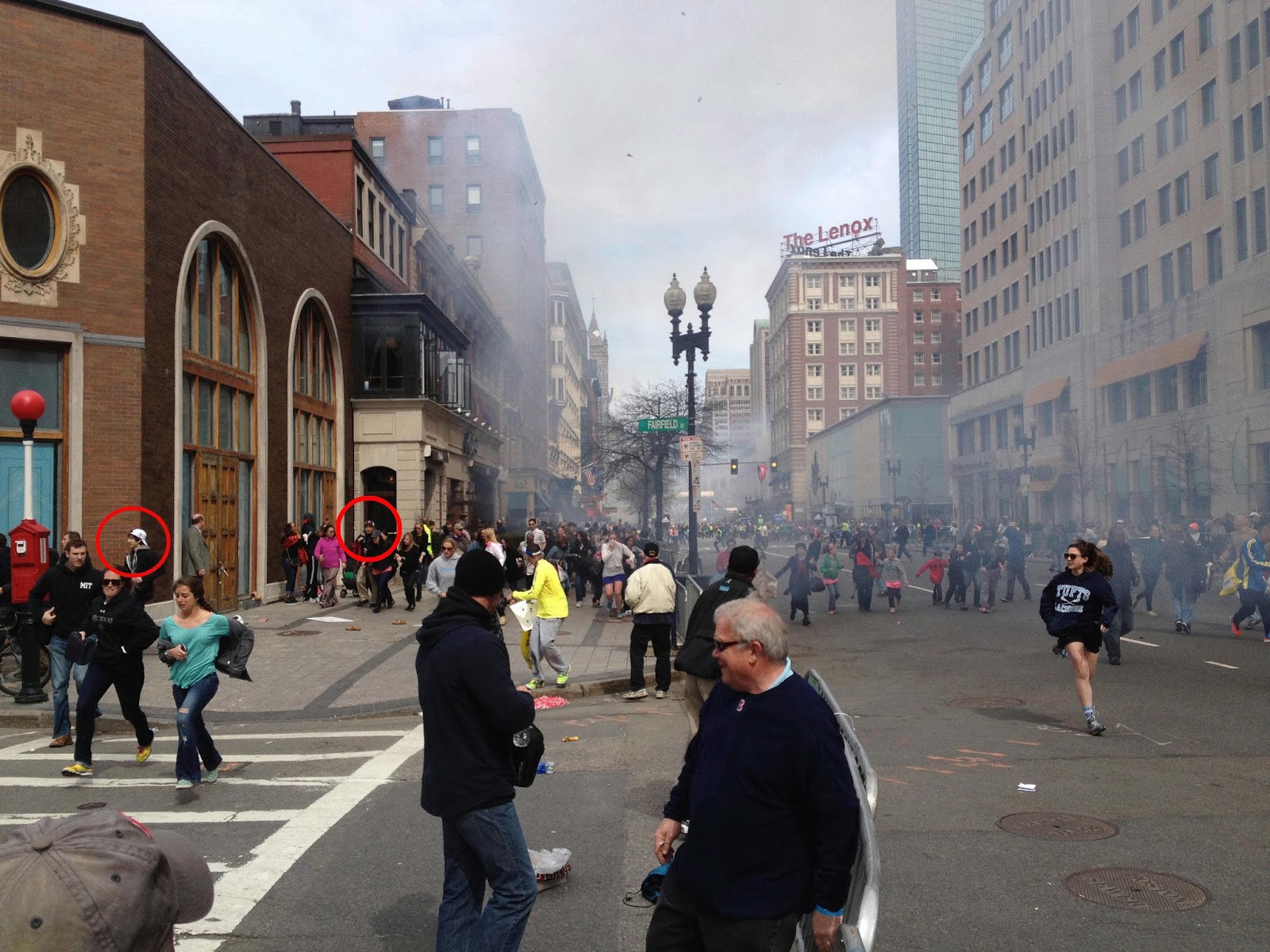 This is a continuation of my analysis of the above photo. In my last post I established that this photo was taken just after bomb #1 went of and seconds before bomb #2 went off, and the location that it was taken was one short block west of site #2. Now, I want to follow this up and concentrate on the people we see in the foreground.

Starting at the far left, in front of suspect #2, we have MIT man (1) and the woman in black beside him (2). At center, we have the man in the toque with his back to the camera (3), and to his immediate right the older man facing to the left (4). On the far right, we have the running woman (5), who has been identified in post #1786 as Collier Clegg, and who claims to be a university student that just happened to get caught in the melee. 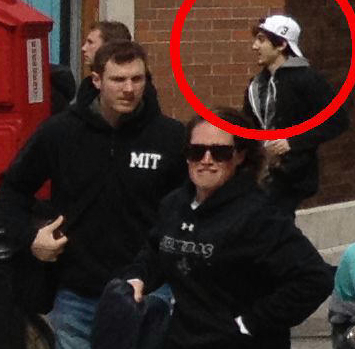 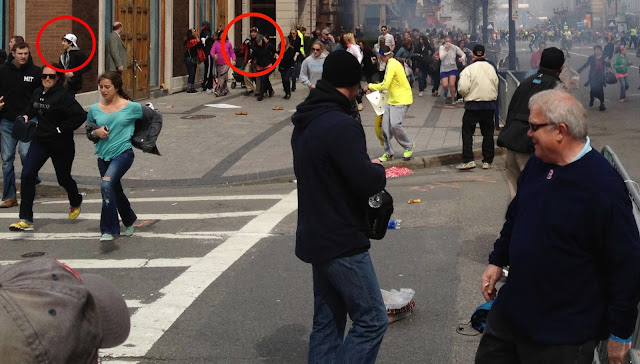 - MIT man’s right foot is flat on the ground, indicating that he’s walking.
- 2’s feet appear to be off the ground, indicating that she’s running. She may be with the girl next to her, and uninvolved.
- 3 is standing or moving about slowly.
- 4 is standing casually. He appears to be with 3.
- The cameraman and another person in a beige cap (lower left corner) appear to be with 3 and 4 as well.

Just to note, I also notice that the girl running beside 2 has tears in her jeans. She may be with 2, and/or may be intending to play a victim at site #2.

What gets my attention more than anything else in this photo is 4, who is smiling away right after the first blast, and looking quite calm in spite of the panic in the background. He also has that ‘seasoned cop’ look about him. 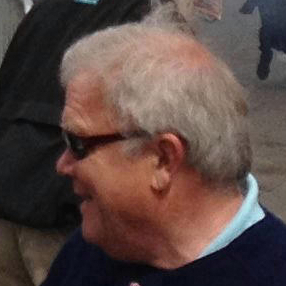 In fact, all five have that ‘undercover cop’ look about them, IMO. Cops always dress a certain way (usually plain clothing), groom themselves a certain way, and act a certain way. They have very little imagination or style that reflects any sense of individuality when they’re on the job. They’ll usually be distinguishable by their coordinated clothing style and colors when working as part of a team – particularly where members may not know each other personally. They also have a habit of hanging tightly onto anything heavy they’re carrying when they run, as we see both 2 and 5 doing with one hand in their pockets. I suspect these are their radios.

Getting back to my preliminary observations, we can assume that 1 and 2 are not together. 1 has been walking along Boylesron just ahead of the suspects, while 2 and 5 have been running in parallel, moving in the same direction as the suspects. 2 and 5 have therefore come up from behind the suspects, and are now passing by 1, 3, and 4. 3 and 4 have been hanging around that spot, along with the cameraman.

Now, considering the likelihood that the cameraman was with 3 and 4, and that the appearance of 4 is as it is, I wonder about the reason why this photograph was taken. I suspect that it was intentionally taken to capture an image of the suspects near site #2 after the first blast, as part of their setup as the patsies.

I proposed in a previous post that there would have been two teams directing this operation, one at each bomb site. Just like we saw the mercenaries at site #1 both before and just after the blast, the team at site #2 would be located somewhere near that site but out of range of the blast, as we see with 3 and 4.

I also proposed earlier that the suspects were directed to walk the route they did, and I now propose that MIT man is their FBI handler, who may have been leading them on their route that day, or was otherwise stationed along the route to watch for them and make sure they did as instructed. To support the suggestion that MIT man is their handler, I offer the following images of what appears to be the same man during the manhunt:

Apart from the similarity in the hairstyle and facial structure, the most telling thing here are the shoes:

Note the color, the low-cut tops, the flat toes, the laces, and the shape of the sole – particularly the heal area.

I think we might have the same man being detained during the manhunt as we have in this photo of the street during the bombings. I want to discuss this further later on, but for now I want to stick to analyzing the scene in the first photo above.

We know that, for whatever reason, the suspects were chosen to be the unwitting patsies in this operation. They had a history of some kind with the FBI, and it’s possible that they had been recruited (or at least thought they had), with the intent to use them in whatever way they might be useful.

If this is anywhere near accurate, then an agent would have been assigned to act as their handler, being the only one in the agency that they would normally ever come be contact with.

I can only assume that the suspects were invited to tag along on this operation in order to “get their feet wet”. They would have been told to just follow instructions and not ask any questions. They may not even know their handler’s real identity. I’m sure that they were deeply involved with the FBI at the point of the bombings, and had probably been used to try to infiltrate Middle-Eastern or Russian terrorist cells. But they just didn’t have what it takes, and the FBI recognized this and decided to dispose of them. Thus the reason for using them as patsies in the bombings.

So I propose that MIT man is the suspect’s handler. He probably didn’t know at the time of the bombings that he’s helping to set up his protégés. He probably didn’t know that he’s involved in a criminal act at the time that the photo was taken. Like his two protégés, he’s expected to just take orders and carry them out. The same goes for 2 and 5, and possibly even 3 and 4. Only 1 really needs to know who the suspects are, but if 2 and 5 are involved as I describe here, then they would also know, but none of them would know that the suspects were being set up.

So let’s consider what might be going on in the first photo.

Just prior to the blasts, the suspects/patsies are instructed by their FBI handler (MIT man) to walk separately and follow him away from the marathon and head west. As they do, the bombs are set off, so that we see them here at Boyleston and Fairfield following MIT man just after passing site #2 and just before the second bomb goes off. MIT man has just made eye contact with his supervisor (4), who has been waiting for him to come along. This is a signal to proceed with the main plan.

The suspects have also been tailed by 2 and 5, who are now moving past them as they reach this point, while 1 is now signaling to 3 and 4 that the suspects have arrived. 3 and 4 have been stationed at that corner, waiting for 1 to come along and give the signal. The cameraman snaps a picture at the signal. He doesn’t know who the suspects are either. He’s just there to be the anonymous source for this incriminating photo of the suspects passing site #2 just before the second blast. 4 is supervising this part of the operation, being in charge of site/bomb #2. 3 is the man who actually triggers the detonation once 4 gives him the go ahead. Since 3 would have to know about the bomb if he’s the one who triggers it, his face may have been purposely hidden in the photo. 4, although he also knows about the bomb, is an experienced agent who poses little threat to later exposure, so he’s not quite as concerned about his face being seen in the shot.

This compartmentalization assures that the facts about the case can’t be easily put together so that no one is in a position to expose the larger operation.

I’ll stop here for now. In this post, I’ve made a number of observations that suggest that the people described in the photo are tied to the bombings. I might be right, or I might be wrong. Either way, there had to be something like what I’ve described going on to make sure that setting up the patsies was guaranteed, and this particular photo was crucial to that. If the suspects had decided to turn off Boyleston at Exeter (between #1 and #2) then the official story would be weakened. If anyone had taken a picture with them in it at some other location during this crucial time period, then the official story would have been weakened even further. I feel very strongly that this photo was taken by the feds themselves, and released to the public to convince them of the official story.